ROCK ME NOW: An OC Zine 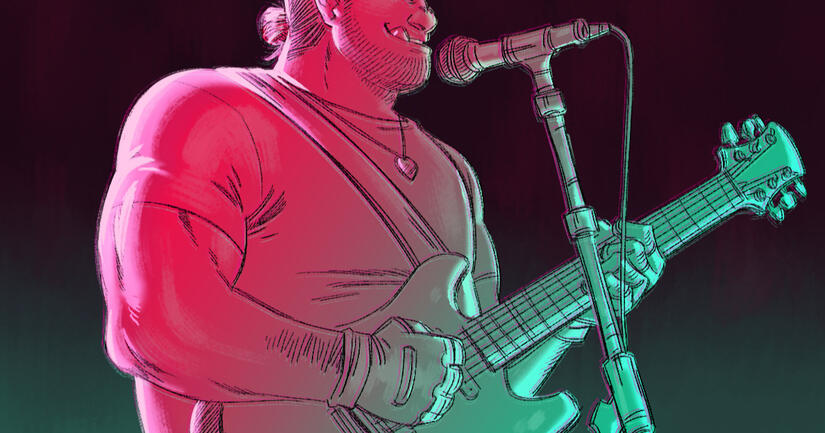 Because the zine will be digital, and free, this is a pretty casual affair. So don't sweat too much! I just want to bring together a bunch of fun characters who like to rock.

This is an art-only zine, but there will be an extra page after every two pieces for contributors to write a short blurb (under 50 words) to introduce their band/character.
Both illustration & comics are allowed, in any medium! Contributors get one page each. This zine is for free/for charity, so this is not a paid gig.

The aesthetic focus of this zine is more on the side of DIY bands/musicians, which means do-it-yourself - that generally just means a band who isn't signed to a big corporate label, and does a lot of the work like merch and stuff theirselves. As long as the band generally follows an "alternative" aesthetic or vibe, you're good. Rock, punk, folk, goth, ska, metal, emo, grunge are all ok - Basically, we're talking indie underdogs, not polished pop stars!

Your piece should showcase their musical talents, life as a musician, or anything that just makes it clear that they play music/are in a band. Get creative! You could draw them hanging outside of their tour van while on the road, a gig flyer for their band or act, a cool poster of them that would hang in somebody's bedroom, a magazine cover featuring them, a photo of them performing in front of an audience, or if you want to keep it simple, just a good ol' pin-up of them with their instrument(s)...Those are just some ideas! You can draw one character, or the whole band - Up to you.

Characters don't have to be human, but they do need to be in a generally modern aesthetic. No fantasy bards, sorry! But if you want to include them, try a modern reimagining!All characters in the piece must belong to you, but if you want to include your friend's musicians, be sure to get their permission first.No 18+ content allowed.Your piece doesn't have to be in color or something crazy elaborate, but you'll be expected to put some effort into it! You'll have two months to complete your piece. Final submitted illustrations should be 5x7 inches, portrait style, in at least 150 DPI.

Will this zine be physical or digital?
This zine will be a digital PDF available on Gumroad.

Is this zine for-profit or for charity?
This zine will be free and you can pay what you want for it, with all proceeds going to a charity that will be chosen at a later date. When the zine is close to completion, I'll poll the contributors with a few choices of charity before settling on one, and I'll be aiming to find charities focused on supporting Black & POC musicians, or COVID19 relief for musicians.

Do I need previous zine experience to apply?
No way! Anyone is welcome, even if you've never done a piece for a zine before. This is a pretty casual gig! I'll be picking based on whether your art/character(s) seem like a good fit for the theme.

Does my character have to be in a band, or can they be a solo artist?
They can be a solo musician! A full band isn't required. As long as they play an instrument, they're good to go.

Does my band/musician have to be punk?
Punk is very welcome, but not the only genre allowed! As long as the band generally follows an "alternative" aesthetic or vibe, you're good. Rock, punk, folk, goth, ska, metal, emo, grunge are all ok - As long as they're indie, and involve instruments like guitars, drums, etc. Your musician or band has to have at least one instrument!

How many pieces can I do?
Each contributor is allowed one 5x7 page, and a short text blurb (50 words or less) to introduce their character(s). This blurb will be included on a separate page from your piece.

How much time will I have to complete my piece?
You'll have two months to complete your piece.

I have another question!
If you have any other questions, just DM me on Twitter at @sirgrimmington, or email me at [email protected]

2/8/2021: The final deadline has passed! I'm amazed by everybody's entries! It's time to put together the zine. I'll be aiming for a late February/early March launch. The zine will be available on Gumroad, and all proceeds will go to the Black Artists Fund. Stay tuned!!!

12/1/2020: The final deadline for your finished piece has been amended! Your new deadline is January 15th.

11/2/2020: All emails have been sent out! If you applied, you should have received an email. If you didn't receive an email or have questions, drop me a line at [email protected] Let's goooooo!!!

10/27/2020: Thanks for your patience! I'm doing my best to get through all these applications. I'm hoping to be done with the process later this week - Everyone who applied will get an acceptance or rejection email, so you'll know for sure. I'll update again once emails have gone out!